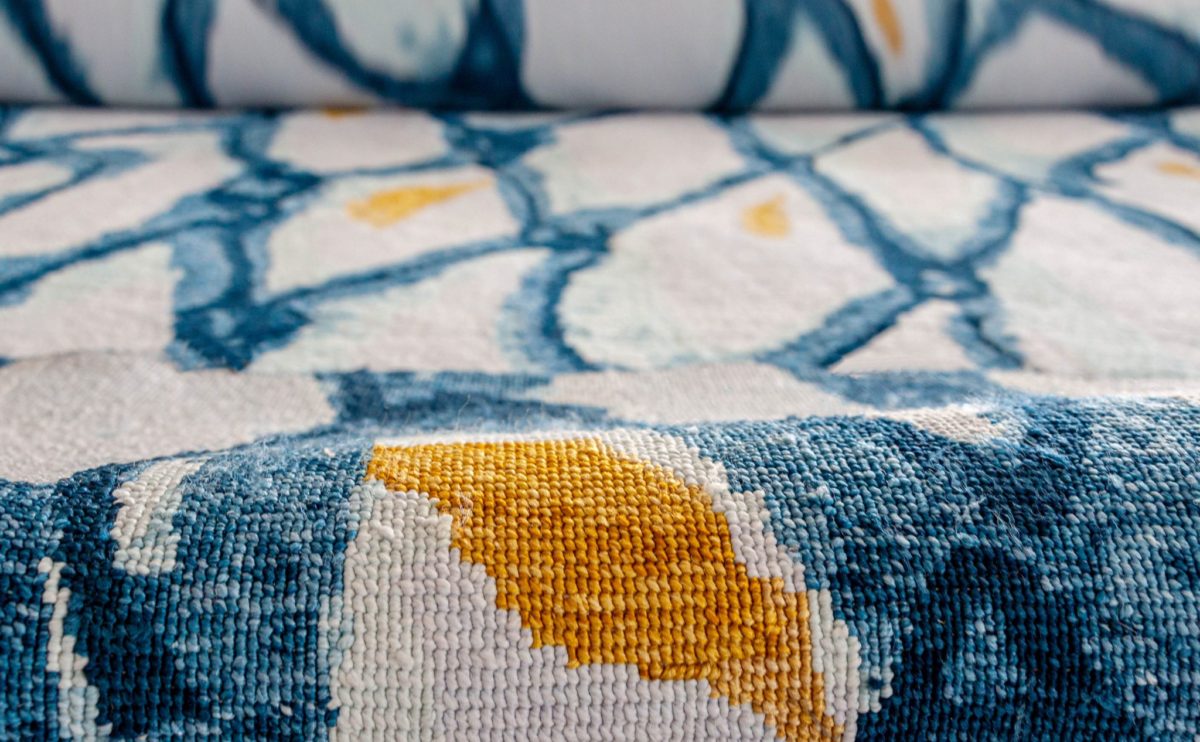 To explore the creation of a new product is to take a step away from what has been into the unknown, the perhaps unfathomable, the hitherto unrealized. It requires a degree of modernism and a progressive mindset insomuch that conservatism simply tends to favour the status quo. With that comes a degree of irony associated with rug makers of today who while immediately embracing the aesthetics du jour, also favour steadfast traditional techniques even at the expense of efficacy and efficiency, socio-economic concerns, and as is relevant to ‘Nylon Engulfed’ the prototype handknotted carpet made of ECONYL® regenerated nylon, contemporary environmental and climatological concerns.

To be direct, there is also an inherent air of obfuscation within the handknotted, handmade, and machinemade rug and carpet industry. Whether it is the generous use of the word ‘hand-‘ as prefix lending an authenticity of craft, the unwillingness to discuss the pros/cons and features/benefits of relatively newfound materials such as viscose, or more broadly simply an unwillingness to discuss any topic that may be perceived as negative (to business) to cite but a few examples, there are – and everybody knows – instances and areas of the rug and carpet industry – any industry in actuality – that should be improved.

I myself have an incredibly long list of person and professional items that need improved and sometimes in order to do that I have to open up honestly to my spouse and we must ask questions. Fortunately, this is not that. 😏

What this is however is a frank listing of the things we’ve learned thus far from the creation of ‘Nylon Engulfed,’ the prototype handknotted carpet made from ECONYL® by Sarawagi Rugs and designed by Isobel Morris. I say ‘we’ because of course my involvement in this project was not that of journalist – I have hopefully never claimed to be one though I do enjoy the benefits of press accreditation – but that of commentator, consultant, documentarian, philosopher, presenter. I present the information in a manner I feel is fair.

Furthermore, this project has reïnforced in me a belief that humans have the ability to solve the problems we’ve created if only we are willing to acknowledge them with truthful discussion and then act accordingly. We can even still make money in the process!

But, at the end of the day, further research is often needed if one is to form a truly multiple perspective informed opinion or decision. You can be part of the ‘we’ too if you take up that mantel of curiosity and creativity and build upon what has been done here. In the end, if this type of discussion finds workable solutions to climate change and pollution, et alia – other than the current status quo – then how transcendent that would be.

In order to more accurately gauge how well ECONYL® integrates into the handknotted rug making process, we asked the weavers of ‘Nylon Engulfed’ – Kumari Rai, Paljung Sherpa, and Sun Maya Lama – their thoughts on working with ECONYL®. Furthermore, direct observation of both the weaving as well as the loom area provided additional insight.

If the yarn waste makes it from Kathmandu, Nepal into the nylon regeneration supply chain that yields ECONYL®. This is a conundrum of course, but like the others easily solved already, it is one with an at hand solution. Perhaps there are even others? Stockpiling the yarn waste from each ECONYL® carpet made in Nepal, potentially from different makers, seems like a logistics quagmire with high uncertainty as to whom even would bear the financial responsibility. Perhaps at a future point in time this would make sense but for now a simpler, and to be frank, more collaborative and marketable effort is required.

For Sarawagi Rugs one possible solution under consideration involves working with Aquafil as partner to coördinate the return of the waste yarn into the ECONYL® production chain. How could this be done, hypothetically speaking? Each ECONYL® made rug shipped from Sarawagi Rugs would also include a small parcel of the waste yarn, complete with a prepaid label addressed to the ECONYL® recycling facility in the destination country. The recipient of the rug then only has to hand the parcel to the shipper and voila!, the waste yarn will enter the regeneration cycle. Ideally the packaging for the waste yarn could even be made of nylon so as to further minimize single use materials. In this manner a carpet consumer, whom I postulate is already excited about their eco-friendly carpet, can actively participate in the process, even if it is as simple as dropping off a parcel.

As for other concerns, questions, and potential issues with a handknotted carpet made from ECONYL®, these are those already readily apparent.

Further concerns are raised in the article ‘Is Econyl® one gateway to a clean future for rugs and carpets?’ by Denna Jones which appears in COVER 57 | Winter 2019. Jones highlights the fact that while yes nylon is being regenerated, the thermal depolymerization process is ‘problematic’ citing Econyl’s own EPD (Environmental Product Declaration) which reports that the firm’s thermal energy is still largely generated via coal, only having recently lowered its reliance from ninety to sixty percent (90% to 60%)​1​. At the same time, Aquafil’s electrical consumption is generated entirely, one-hundred percent (100%)​2​, from renewable sources so as with all steps in the right direction there is a mix of superior and improving efforts. More information can be found in the firm’s 2018 Sustainability Report and Financial Statements.

In the opinion of this writer, more questions and concerns such as these need to be raised so that we work ever faster toward real, not just planned or envisioned solutions which balance human needs and wants against the finite resources and fragile environment of this planet. Furthermore we must abandon the established, that is conservative mindset that causes us to accept the existing as somehow sacrosanct while actively questioning the novel and modern.

In fact, if the implementation and integration of ECONYL® into rugs and carpets does not include a craddle-to-grave, circular design methodology then I humbly suggest not utilizing ECONYL® or any synthetic for that matter. To do so would be to simply pass the problem on to another generation; we’ve done that enough.

For example, in the same COVER article, Jones interviews Shally Sarawagi of Sarawagi Rugs, makers of ‘Nylon Engulfed.’ As an ardent environmentalist – and self described ‘ecoholique‘ – herself, Sarawagi bravely turns this line of questioning toward the status quo of rug making in the Kathmandu Valley of Nepal (and beyond), asking in essence, ‘What can we do about dye runoff?’ Nylon dyes very similarly to wool and as such integrates almost seamlessly into the handknotted rug manufacturing process. Logistically this is great, but a caveat – applicable to any material dyed in such a manner – must be stated. Untreated dye runoff from dye facilities in Nepal, and it is safe to say, virtually all rug making countries, remains a concern dating to the earliest years of the contemporary rug trade. While great strides in reducing untreated runoff have indeed been made and legislation meant to forbid untreated effluent from entering the water supply is place in Nepal, enforcement is lax, with cheating and illegal dumping of effluent still a concern. Shally Sarawagi, ’We avoid talking about the environment and ethical issues,’ she says referring to those in the industry, ‘but for the sake of people, communities, and the environment we have to discuss these issues now.’​1​

It should be categorically stated that this aforementioned issue is neither inherent to, nor resultant of the use of ECONYL®. At the same time it is precisely this questioning of everything that will transition the handknotted rug and carpet trade to a circular economy and I, perhaps even the future rug trade itself, owe a debt of gratitude to those such as Giulio Bonazzi of Aquafil and Shally Sarawagi of Sarawagi Rugs who have encouraged us to ask what we don’t know and likewise question the status quo.

One final caveat is for anyone considering making a carpet or rug – handknotted, tufted, flatwoven or otherwise – from ECONYL®. As mentioned elsewhere in this series, it is not simply a matter of making a rug from ECONYL®. It is a design process, a philosophical break from how we have given into disposable consumerism. Yes, making a rug from ECONYL® is great, but would it not be an even greater success to create one from ECONYL® that can and will be recycled and regenerated? For that, collaboration, possible refinement of technical design, and more considered logistical thought is required so as to avoid ‘The Great Recycling Con.’​3​ – an imperative if we are to truly affect positive environmental and climatological change. I personally assure you that Aquafil is willing to work with qualified partners worldwide to build this circular economy.

Ask such, on behalf of Mr. Giulio Bonazzi, CEO of Aquafil, makers of ECONYL®; Shally Sarawagi of Sarawagi Rugs, makers of ‘Nylon Engulfed’; Isobel Morris, designer of the collection; Domotex; and of course myself; I invite you to join us as I present ‘The Making of an Econyl Handknotted Carpet’ on Friday, 10 January 2020 at 14:00 (2:00PM) in Hall 3 of Domotex. There will be a guided discussion on the project followed by brief questions. We invite you to ask what you want to know.

The carpet ‘Nylon Engulfed’ as well as ‘Gentle Discord,’ another of the forthcoming ‘Synthetic Seas’ collection designed by Isobel Morris specifically for this project, will be on display in the Framing Trends feature area of Domotex (Hall 8) for the duration of the fair, Friday, 10 January through Monday, 13 January 2020. Come touch the handknotted ECONYL® carpet for yourself! Staff of Aquafil will be on hand to answer questions about ECONYL®. As for carpet questions, some of those might be things we still need to figure out… .

This article is the fifth and concluding article of a five part series; part four can be found here.

Special thanks to Aquafil for allowing me – with consultation – gracious and wide latitude in my discussion of this project. I truly believe that unless we are willing to have frank discussions about our work and intentions then we are failing ourselves and future generations.

This article was originally published on The Ruggist’s blog.