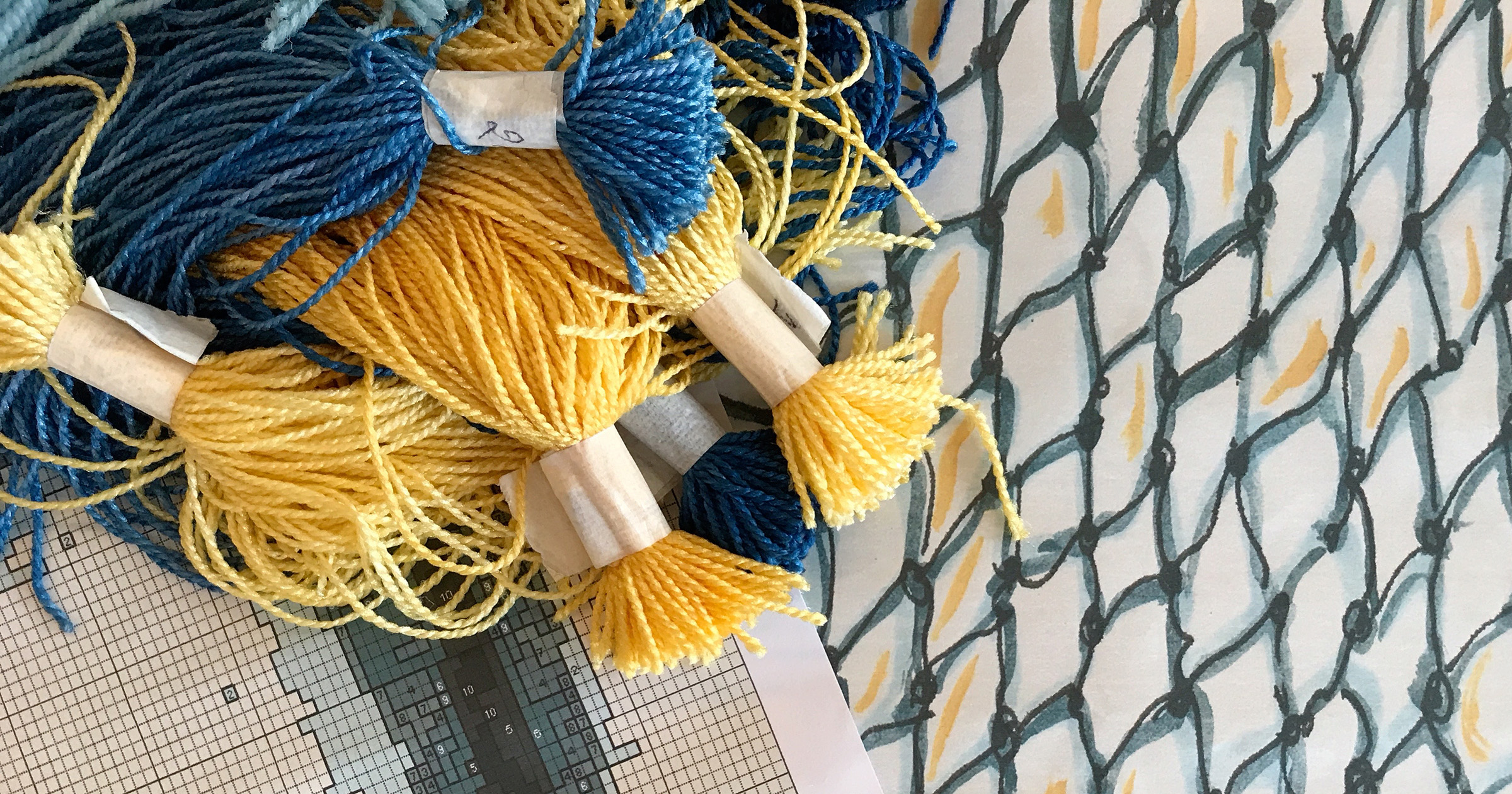 What happens when the intrinsic appeal of handknotted carpets intersects with the technology of today?

Humanity does not, and likely will not ever know precisely when weaving and knotting of handknotted carpets first started. Certainly Persia played a role, as have other regions of the world, including of course Tibet. The latter being the origin of the technique now being employed by Sarawagi Rugs of Kathmandu, Nepal to create the first handknotted carpet made of ECONYL® regenerated nylon. Designed by Isobel Morris, it is a prototype which begs the question: ‘What more can be done to improve the environment of the planet, while satisfying the needs and wants of rug and carpet consumers?’

Various theories further hypothesize as to the specifics but as noted even in the analysis of the oldest extant carpet, the Pazyryk Carpet​1​ – which dates to the the fifth century B.C.E. – uncertainty remains. Abridging the long and storied history of carpetry is not an easy task nor is it one attempted herein, rather for the purpose of this series of articles one need only recognize that carpet weaving and knotting has existed for at least 2,500 years. In those intervening years since much has developed in regard to textiles and of course carpetry.

The late 1980s and early 1990s C.E. saw an expansive growth in the production of handknotted Tibetan weave carpets originating from the country of Nepal. Brought about by myriad factors including social and economic development as well as the whims of fashion, these carpets entered the global market and – due to their then apparently novel aesthetics and intrinsic qualities – immediately garnered accolades from critics, buyers, media, and the like. Some thirty years hence and the Nepali-Tibetan carpet industry, as I now call it, has matured into an industry specializing in custom and bespoke carpets catering to the upmarket consumer. But what makes them upmarket, which is to say in a slightly affected manner, a luxury?

The major factor contributing to the allure of a handknotted carpet is the relative rarity of the form brought about as a function of labour. Each knot, each pixel of design if you will, must be tied by hand, by a human, to create the entirety of the finished carpet. While different methodologies and techniques of weaving and knotting exist, each requires this expenditure of manual human effort and thus – given the reälities of this time – the cost should be commensurate with the expenditure of effort. In short, even in the Global South​2​ wages contribute to expense. Furthermore as textile work such as carpetry is often mechanized out or simply priced out of the labour market due to development – the Luddites​3​ were not paranoid – scarcity further contributes to the expense. We as consumers thus equate this as luxurious in its broad understanding.

Another factor, one far more critical to the discussion of the prototype handknotted nylon carpet currently being produced by Sarawagi Rugs in collaboration with Aquafil, makers of ECONYL® regenerated nylon, and designer Isobel Morris, is the selection of materials, namely ECONYL®; a novelty insomuch that it runs contrary to the traditional materials typically employed.

Returning briefly to the Pazyryk carpet it should be noted that throughout the 2,500 some years of known carpet making the materials of choice have almost entirely been natural in origin. Sheep’s wool, as is the case of the Pazyryk and the vast majority of carpets, as well as silk, cashmere, mohair, yak, alpaca, and so on; Tibetan Highland Sheep’s Wool from the Tibetan plateau has been the historic and remains the current fibre of choice for Nepali-Tibetan weaving. Natural fibres, primarily wool owing to is inherent qualities and importance to the history of human development​4, have long reigned supreme in this genre. It should be obvious that this originates due to the availability of fibres regionally, historically, and technologically, which is to say humanity simply did not have the ability to make another fibre. Now in this era, the relatively recherché nature of said natural fibres contributes to their scarcity and thus, luxury.

So how is it then that ECONYL® fits into this paradigm? As nylon is by no means scarce, the answer lies not in standard contributing factors which define luxury, rather in the newfound luxury necessitated by the Anthropocene​5​. This is to say expressly that if society as a whole wishes to have its proverbial cake and eat it too then changes must be made. Theoretically this means designing all products, in this instance a handknotted carpet, with a cradle to grave design plan that includes, when at all possible, a circular economic and materials approach. ECONYL® regenerated nylon satisfies these requirements.

This is most emphatically not to say that natural fibres and indeed products made from them are not nor can not be environmentally sound, quite the contrary actually. But it is to say that in an era in which fashion and human desire for new moves in exceptionally fast cycles, we must consider avenues of production – of all wares not just luxury – which accommodate this desire. These must also incorporate the requirement that we – as a civilization – clean up the mess we’ve made of this planet. No longer can we make and simply throw away, we must make and then reüse.

Paradoxically, a handknotted carpet made of wool, et alia may still be serviceable even when its style no longer suits the alluded desires and fashionable whims of the time. Long seen and traded as a reüsable product capable of withstanding, quite literally, several generations of considered use and wear, the eventual demise of the carpet has little forethought. Ideally it can be discarded through composting, though this is definitely not always the case. What becomes of this hypothetical handknotted wool carpet is a mystery for no tracking of the secondary market of non-antique handknotted rugs exists. Certainly some are sold through auctions and liquidators, just the same as others certainly end up as landfilled waste, as depressing as that may be to read, with – and I am stating this anecdotally – few if any being introduced into a formal composting or recycling process.

Formerly handed down to subsequent generations, modern consumption now demands something new, something fresh, something of this time – as noted previously – in exceptionally fast cycles. What is desirable this year is far different from something desirable in say even just five years. So it is then that all these luxurious handknotted carpets may be prematurely discarded, a testament to this era of excess and perhaps to current interpretations of luxury itself. This is how ECONYL®, cradle to grave design, and circular economies factor in to redefining luxury. It reïmagines handknotted rug and carpet making with the technology of this time, not the technology of the fifth century B.C.E. nor any time hence.

Consider then another solution. A carpet made from recycled waste that can – at the end of its desirability and usefulness to consumers – be turned into another carpet or any other product made from nylon, specifically of course, ECONYL® regenerated nylon. That is the underlying premise of Econyl’s emphasis on circular design and the circular economy and it is one the handknotted rug industry – amongst all industries – must consider if the industry is to do its part to remediate the climate crisis. The technology now exists to engineer, to design a rug such that it looks and feels just like a handknotted carpet – because it is – but is also one that has a planned eventual demise. To carefully invoke a bit of Nepali and Tibetan culture from which this prototype originates at the hands of Sarawagi Rugs, it’s a reïncarnation if you will and it reflects the way nature itself operates. No waste, only reüse.

This emphasis on circular design brings to the forefront the desires of consumers to have ever fashionable, stylish, and new products while mitigating the waste factor; a critical element if we are succeed in these efforts. And while it is true that a handknotted rug or carpet made from all natural materials can be produced sustainably and recycled insomuch that it actually is, creating a product for which there is practically an indefinite lifespan is antithetical to the wants of many of today’s consumers.​*​

For those who still desire the luxury of the handknotted natural fibre carpet – including this writer – we must reïnforce this is a lifetime investment in that style. For those who wish to replace carpets frequently however, a new circular methodology must be employed in order to eliminate the accumulation of discarded wares and waste and moreover, as the Econyl fibre is itself made from reclaimed and recycled waste, it contributes positively to the mitigation of pollution, another necessity of this era. One solution amongst many is to create carpets – handknotted, machinemade, or otherwise – in a way that allows them to be easily recycled. In a way it is a form of planned obsolescence but it is one that factors in both the wants of consumers and the needs of this planet. A handknotted carpet made of ECONYL® may be such a carpet.

After all, what could be more luxurious than having an impressively beautiful handknotted rug, using it for whatever period of time one so desires, and then recycling it into something new. No new waste, no guilt, simply the joy of having experienced an object made ephemeral by the will of humanity?

This article is part two of a five part series; part one can be found here.