THE RUGGIST – Handknotted Nylon? | Part One 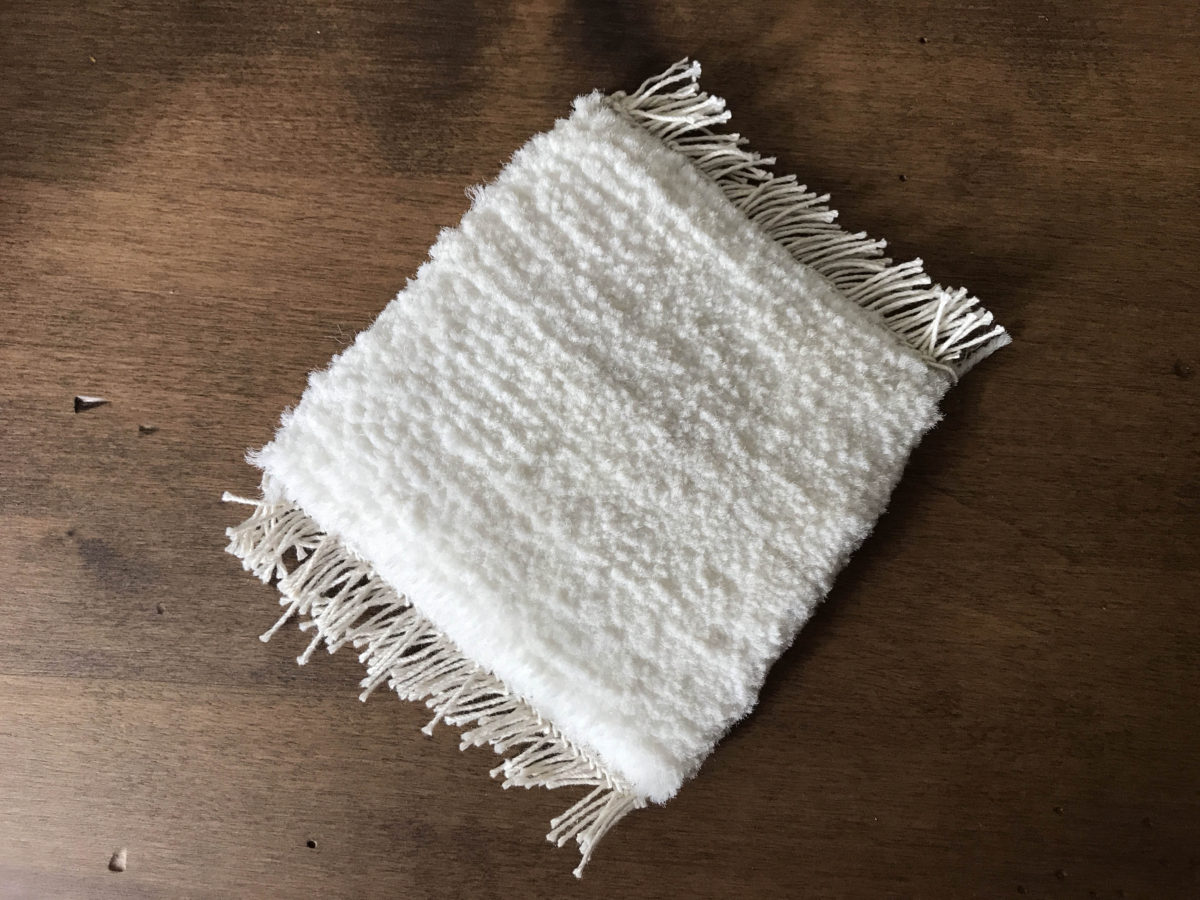 A collaborative project exploring the novel use of regenerated ECONYL® brand nylon in a handknotted carpet.

There are many words across the spectrum of languages which are used to describe serendipity, chance, fate, karma. So often in examining the past successes of others, it seems as though these confluences of good luck and timing have netted those recipients thereof good fortune in their endeavours. The same is of course true for those who suffer at the more nefarious whims of time and destiny, though human civilization – such that it is – favours tales of success over that of failure. Today we – the entire human civilization we – find ourselves at one such nexus point with the uncertainty of the future made less so by the advance of science and technology.

Laid bare before us now we face a genuine existential decision about what to do to not only stop polluting, warming, and in general ruining the planet we call Earth but also what to do to clean up the mess we’ve collectively made thus far.

When asked during the ‘Design and the Circular Economy’ episode of the NeoConversations Podcast​1​ if there may come a time in the future when we mine landfills for raw materials instead of say drilling for oil or other non-sustainable methods of raw material extraction, in short ‘Can we clean up the planet through manufacturing?,’ David Oakey, a noted broadloom and modular carpet designer and Principal of David Oakey Designs replied, ‘We may not have a choice.’

Oakey was in conversation with Giulio Bonazzi, Chairman and CEO of Aquafil, makers of ECONYL® brand regenerated nylon, who along with Oakey sees beyond the politics of climate change and pollution, tackling real-world problems in order to improve the future. One in which we must ‘not use nature, but learn from it’ according to Oakey and one in which education is key. ‘Because we have to explain to consumers what is good, how it should be, and tell them the truth. Which is sometimes not what we [society and business en masse] normally do,’ states Bonazzi in rather forthright terms.

And the truth is that the future means of consumption and production on Earth are to be different from today.

Fortunately for Bonazzi and Aquafil we still do have a choice – nominal as it may be in the grand scheme of things – and for that firm, the choice was clear. Be prepared for the future. The choice was also an easy one for me. Do I choose to participate, document, and tell the story of an innovative handknotted carpet, or do I choose to accept the status quo of handknotted rug production. As Joe Cutler, National Geographic Explorer and Freshwater Consultant said in the Prada Re-Nylon Video #2 – Cameroon​2​, regarding the reclamation, regeneration, re-production and eventual recycling under the ECONYL® closed loop production system, it’s an ‘exciting way to combine conservation and development.’

Without further ado, this is the backstory and a peek at the beginnings of the process.

‘Oh I have something I would like to show you!’ exclaimed Shally Sarawagi, as I sat across the table from her at the offices of Sarawagi Rugs in Kathmandu, Nepal, in December 2018. I waited in anticipation as she left the room presumably to obtain the ‘something.’ ‘I would like to know what you think of this,’ queried Sarawagi as she placed a diminutive plain white sample of handknotted carpet on the table in front of me. I picked it up, rubbing it between my thumb and forefinger, the hand soft and supple but unfamiliar. ‘This isn’t wool, I don’t recognize the hand,’ I stated definitively, ‘What is it?’

‘It’s Econyl stated Sarawagi, ‘It’s made of recycled nylon from fishing nets and other waste.’ My eyes surely went wide as Sarawagi continued to explain before I interrupted, ‘Oh I know the product. I gave a presentation of ‘For the Love of Carpets!’ to their design and sales staff and toured one of their production facilities in July 2018.’ ‘But you are The Ruggist,’ began Sarawagi, ‘What were you doing talking with a manufacturer of nylon?’ What indeed.

Months earlier I had received an inquiry regarding a possible presentation of ‘For the Love of Carpets!’ It came from Aquafil, an Italian multi-national who has pioneered the development of a fully regenerated nylon – ECONYL® – made from both pre- and post-consumer nylon waste including fishing nets reclaimed from the world’s oceans and waterways. Amongst other caveats I felt obliged to write in reply, I said ‘My expertise in is handmade rug making so do keep that in mind as my presentation only includes handmade rug examples.’ A prudent statement I felt given the expense of flying me to Aquafil’s headquarters in Arco, Italy. ‘I really believe your presentation could be inspiring for us… ,’ came the reply.

‘I figured that if I am to be ‘The Ruggist’ perhaps I should broaden my own horizons and learn more about the rest of the rug, carpet, and broadloom industry,’ I further explained to Sarawagi.

We, the collective we of the handknotted rug and carpet industry, oft present ourselves as the guardians of sacred knowledge, of processes mysterious, and as the standard-bearers of ancient craft. We also like to think of handknotted rugs and carpets in an elitist manner, ignoring or on occasion denigrating the broader – and substantially larger in terms of volume and monies – machinemade portion of the industry; one in which synthetic fibres such as nylon reign supreme. As the long term viability of handknotted production is routinely questioned, most notably in Rob Leahy’s excellent essay on the subject ‘The Evolution of Rug Retailing in America,​3​’ it seems only wise to examine other possibilities for rugs in the future.

‘This is such a surprise to see,’ I said to Sarawagi as I explained what I knew of ECONYL®. As the discussion continued ideas began to develop, mutually shared opinions on how we collectively and individually must work to literally save the planet were exchanged, and talk ensued of a future in which we genuinely examine the sustainability of all rug production instead of simply assuming that a rug made of wool and cotton and the like is more environmentally friendly than one made of synthetics. ‘I’d be happy to discuss this in more detail with ECONYL® when I see them at Domotex,’ I said to Sarawagi as our meeting came to an end.

Three short weeks later during Domotex 2019 I found myself talking with Designer and Developer Gaëlle Merlin, as well as Sales Manager, Peter Goudeseune, both of Aquafil. I explained how I knew this firm – Sarawagi – in Kathmandu that was experimenting with ECONYL®, and how they were eager to pioneer a handknotted rug made of fully regenerated nylon. Proverbial lightbulbs began illuminating.

But the appeal of ECONYL® does not stop there. ECONYL® overcomes two of the major barriers to consumer acceptance. Namely ‘fear of expense and performance’ according to Bonazzi. As ECONYL® is both a regenerated nylon and capable of being regenerated infinitely, it is a closed loop system requiring no further input of raw materials. Once regenerated it is indistinguishable from virgin nylon made directly from petroleum, and now – given the volumes in production its cost is comparable as well. With no cost or performance differences, products made from ECONYL® can ‘integrate into the expectations of consumers’ and thus succeed, again according to Bonazzi.

Of course at this point in time a handknotted carpet made from nylon, in this case ECONYL®, likely does not integrate into the expectations of consumers of handknotted rugs, a domain long dominated by natural and often recherché materials.

‘Natural materials are only sustainable to a certain percentage of the population’ due to overpopulation says Oakey, who further adds that ‘Designers can continue to deplete the Earth or they can change. Our generation did not think about the consequences of our actions.’ [Editor’s note: Oakey is referring to product designers, yet his message is applicable to all designers. Oakey is a member of the Baby-boom Generation.]

Integral to the solution implied by Oakey is that designers must begin to think not only of the creation of the product but its eventual demise. ‘There is no waste in nature,’ states Oakey who draws immense inspiration from the principals of biomimicry. ‘If you have the fortune to change your floorcovering and to change the taste of your bedroom, or living room, or your office, the carpet must not become waste. It must return to its raw materials,’ advises Bonazzi.

For everyone in the floorcovering business this not only requires an examination and analysis of the materials, processes, and techniques used, but also a realization that some methods employed are not currently and will not be suitable in the future. In short, to paraphrase and expand upon Bonazzi’s words, we – that is society en masse – may have to tell people how it should be in order to save the planet and ourselves.

Thus it seems serendipity had united Sarawagi, Aquafil, and myself. All working in our own ways, separately but in tandem, to improve the nature of rugs. The only question that remained was ‘What does one do when fate intervenes such as this?’ The answer is self-apparent, and so it is that Sarawagi, Aquafil, and myself set out to experiment, to look ahead, to think differently in order to examine what could be the potential of a handknotted carpet made of ECONYL® regenerated nylon. Why (k)not?

But first to find a designer… .

And one was found! The talented British rug and textile designer Isobel Morris has been commissioned by Sarawagi Rugs to design a collection inspired by the environmental aspects of ECONYL®. One which will be made of the innovative fibre. One which explores not only the impact of waste on humanity, but also the opportunities which exist to both clean up the planet and to create beautiful, desirable, high-performance, handknotted carpets suitable for a host of interior environments in which wool and other natural fibres may not offer a solution.

Will it be a success? What are the features and benefits? What will the rug look and feel like? Only time will tell and we all cordially invite you to follow along as the story unfolds.

Read more from “The Ruggist”