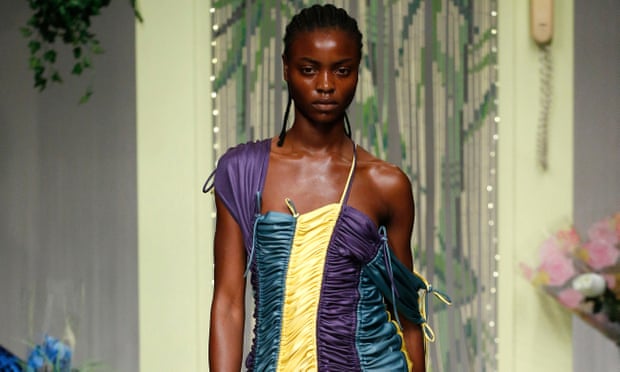 THE GUARDIAN – Trawling for trash: the brands turning plastic pollution into fashion

Fishing nets and discarded plastic are finding their way into wardrobes around the world thanks to a rise in the number of fashion designers using materials made from recycled ocean waste.

Brands including Gucci, Stella McCartney and Adidas are increasingly partnering with organizations such as Parley for the Oceans – which raises awareness of the destructive effect of ocean plastics – and sourcing materials regenerated from companies such as Aquafil, the textile manufacturer that transforms ocean waste into sustainable materials such as Econyl.

Last month, 4,000kg of discarded fishing nets were recovered from waters off the coast of Sicily by Healthy Seas, a joint-venture by non-governmental businesses, before being sent to a recycling plant in Slovenia. It is there that Aquafil spins it into sustainable material for use by the fashion industry.

Richard Malone, a former Central Saint Martins fashion student and now rising star in the designer world, is a leading adopter of Aquafil’s materials. His most recent collection for London fashion week, available early next year, featured outfits made from Econyl and was praised by Vogue as “changing all the conversations about who buys and why”.

“The fishing nets were extremely exciting,” Malone said. “Tonnes are discarded in our oceans every year and [Aquafil’s process] create an eco-nylon yarn that can be broken back to yarn again and again and reused, as well as create really beautiful, functional fabrics like sportswear and washable jerseys.”

The newly launched RiLEY Studio uses Econyl to create its exercise wear. “The idea that sustainable fashion must be of lower quality, made from less durable materials, or is generally less attractive is an outdated concept,” its founder, Riley Uggla, said.